Hey it’s a book release party for Julia Dixon Evans’s debut novel, HOW TO SET YOURSELF ON FIRE.

ABOUT HOW TO SET YOURSELF ON FIRE:
Sheila’s life is built of little thievings. Adrift in her mid-thirties, she sleeps in fragments, ditches her temp jobs, eavesdrops on her neighbor’s Skype calls, and keeps a stolen letter in her nightstand, penned by a UPS driver she barely knows. Her mother is stifling and her father is a bad memory. Her only friends are her mysterious, slovenly neighbor Vinnie and his daughter Torrey, a quirky twelve-year-old coping with a recent tragedy.

When her grandmother Rosamond dies, Sheila inherits a box of secret love letters from Harold C. Carr―a man who is not her grandfather. In spite of herself, Sheila gets caught up in the legacy of the affair, piecing together her grandmother’s past and forging bonds with Torrey and Vinnie as intense and fragile as the crumbling pages in Rosamond’s shoebox.

As they get closer to unraveling the truth, Sheila grows almost as obsessed with the letters as the man who wrote them. Somewhere, there’s an answering stack of letters―written in Rosamond’s hand―and Sheila can’t stop until she uncovers the rest of the story. Threaded with wry humor and the ache of love lost or left behind, How to Set Yourself on Fire establishes Julia Dixon Evans as a rising talent in the vein of Shirley Jackson and Lindsay Hunter.

“This book had me glued. I came for the intrigue buried in the treasure hunt of letters, but I stayed for the unlikely friendship of thirty-five-year-old Sheila and twelve-year-old Torrey. I would read a whole series of these two having adventures together, but I’ll have to relish this singularly heartbreaking and hilarious story of lost and found love, in all its guises. ”
-Jac Jemc, author of The Grip of It

“How to Set Yourself on Fire is a family mystery that slowly reveals itself, illuminating a poignant emptiness in its lovable but complicated main character. Sheila is funny, depressed, searching, and unpredictable. Her story will move you long after its lovely final scene.”
-Lindsay Hunter, author of Eat only When You’re Hungry

“This book features my favorite type of protagonist: the creepy, socially awkward woman who you can’t help but fall in love with. It’s also the best kind of reading experience: a book that is funny and difficult to put down, and builds to something that is disarmingly touching.”
-Juliet Escoria, author of Witch Hunt 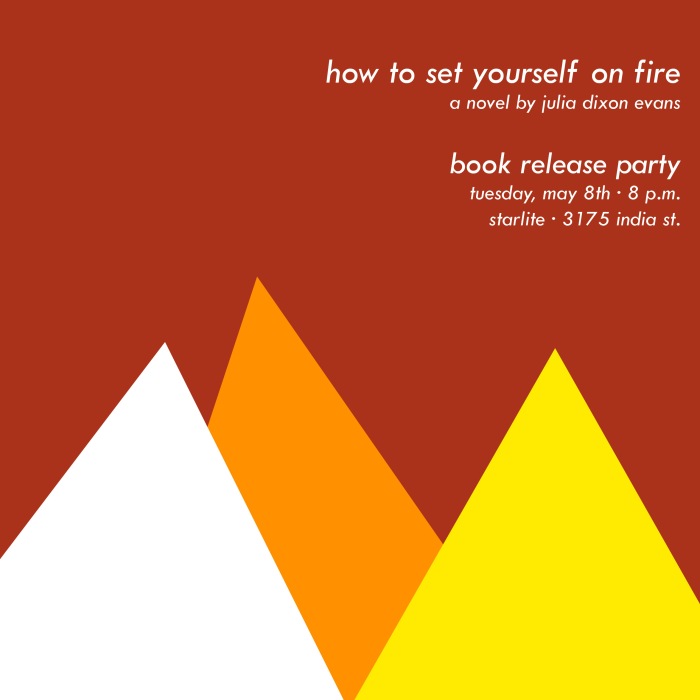